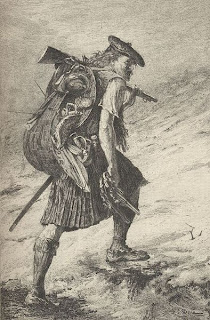 I've just come across this essay by Allan Massie. He's no slouch at historical fiction himself, having written novels about Roman emperors, the Dark Ages and WWII, amongst others. But the master he refers to in his title is Sir Walter Scott, whom he makes the starting point for this stimulating piece in the May 2010 issue of Standpoint.*

Massie offers some interesting points about the value of historical fiction and why novelists and readers are attracted to it, in addition to its undoubted entertainment value:

Scott wrote at a time when interest in history as a means of understanding the contemporary world was being born. He contributed to this and stood also on the threshold of one of the 19th century's most significant features — the development of history as an academic study. The father of academic history, Leopold von Ranke, insisted on the autonomy of the past and sought to recreate it "wie es eigentlich gewesen ist" ("as it actually was"). This is the aim, or at least an aim, of the serious historical novelist, who sets out to offer more than entertainment. In Wolf Hall, for example, Mantel evokes the revolutionary decade of the 1530s, and her hero, Thomas Cromwell, is an emblematic figure precise ly because he represents a new way of thinking. Mantel uses him to show how a new England will take shape.

Why do novelists turn away from the present day to the past, and sometimes, like [Robert] Harris, to the now far distant past? There is evidently no single reason. The writer may have become fascinated by some historical figure, as Mantel with Cromwell or Adam Foulds, whose The Quickening Maze was one of the six on the Man Booker shortlist, with the poet John Clare. Obsession with a particular period — the First World War, for instance — may suggest the theme for a novel. The author may wish to explore the past for its own sake, or to use it to point up the present. Harris's Cicero novels certainly offer a vivid picture of late Republican Rome, but Harris has worked as a political journalist, and these books are also an examination of the nature and craft of politics, all the more effectively so for being divorced from immediate political concerns.

The past is more manageable and easier to grasp than the present. It rewards brooding, whereas the contemporary world shifts and defies reflection.

Massie makes another point, using a favourite novel of mine, Alfred Duggan's The Cunning of the Dove, which a dear friend introduced me to:

The past is, as L. P. Hartley said, another country where they do things differently, and exploring this difference is one of the things that may attract the novelist. There is a fine moment in Alfred Duggan's novel about Cerdic, the first king of Saxon Wessex. Duggan has him as a Romanised Briton who, after misfortunes and adventures, becomes leader of a Saxon war-band. Early in the novel, he is reading Ovid in the courtyard of his father's villa when word comes of a Saxon raid. He puts down the book and picks up his sword, and observes, casually, "I think that was the last time I read a book." In that brief observation, the reader has a moment of illumination, catching the transition from Rome to Barbarism. This is something the novelist can do better than the historian.

But if the past is that other country, it is also a place that in certain respects is much like ours. Human nature does not change, though ideas and practices do. People are always subject to the same emotions: love, hate and fear. The Seven Deadly Sins offer the same temptations, and men are driven by ambition, idealism or the desire to exercise power, in any and every age. By turning to the past, free from the busy distractions of the present, the novelist gains the advantage of perspective.

Massie also comments on dialogue in historical fiction, a bugbear of mine, for so few historical novelists seem to get the right balance between archaic and modern without sounding stilted and sometimes comical. Not even the Master got it right, seemingly:

He also failed to solve the problem of finding the right language for his characters to speak, so that they express themselves sometimes in what one might call ersatz medieval — "zounds" and "gramercy" — and sometimes as 18th-century ladies and gentlemen transported back in time. The result, especially in the works of his imitators, was what has been called "tushery" or "Wardour Street English". His real distinction is to be found in the Scottish novels, more generally, in what Carlyle identified as his ability to remind us that historical figures were men and women of flesh and blood, not abstractions, and that events in the past were once in the future. This is something Robert Harris does successfully in his two Cicero novels, Imperium and Lustrum.

*Standpoint is a magazine I'd never heard of before, but it sounds well worth a read. Here's what its website says about it:

Standpoint is a monthly cultural and political magazine published by Social Affairs Unit Magazines Ltd, a subsidiary of the Social Affairs Unit (Registered Charity No. 281530). Standpoint’s core mission is to celebrate our civilization, its arts and its values — in particular democracy, debate and freedom of speech — at a time when they are under threat. Standpoint aims to be an antidote to the parochialism of British political magazines and to introduce British readers to brilliant writers and thinkers from across the Atlantic, across the Channel and around the world.