The Eagle (of the Ninth) & Roman Military Studies

At long last, on YouTube, the trailer for the forthcoming film The Eagle, based on Rosemary Sutcliff's classic novel The Eagle of the Ninth. Now we just have to wait until February to see the film itself. Comments so far seem dominated by the (questionable) acting abilities of the star, Channing Tatum, who plays Marcus Aquila*. I'm more interested in how faithful the film is to the novel, although really bad acting by the star might just sink it.

*LatinGeek note: full marks to whoever is responsible for Aquila being pronounced correctly.

I've recently discovered History of the Ancient World, a splendid source of academic articles about the ancient world. There are frequent headsy-upsies on Twitter (@historyancient). The website appears to make freely available articles from a few years ago that were first published in learned journals not accessible to non-academics. Anyway, there's one from 2002 by Simon James about Roman military studies in Britain which I found riveting.

There's quite a lot at the beginning about the development of Roman military studies in Britain during the 20th century, including the rivalry between historians and archaeologists (fascinating in a not-very-edifying way), and how changing attitudes to the study of war and violence have influenced Roman military studies. But the most interesting part is later on, where we get to more recent developments and the question is asked: Was there such ever such an entity as The Roman Army? And the author makes a startling comparison between the Roman military and the Georgian Royal Navy (he could have been writing that just for me, as both fascinate me). Read on...

Writing the Legions: The Development and Future of Roman Military Studies in Britain by Simon James. Archaeological Journal, Vol. 159 (2002)

Posted by Sarah Cuthbertson at 14:00 4 comments:

The historical fiction goddess Sarah Johnson (Reading the Past) has just posted on the Historical Novel Society website a list of historical fiction to be published in the USA in the first half of 2011. I compile a list of HF published in the UK for the same period for the same webpage. But I'm behindhand as usual, still waiting for some of the big UK publishers to make their catalogues available. If you're reading this, Sarah, that's my excuse and I hope to get my list to you soon!

Meanwhile, here's a sneak preview of novels from the UK list so far, set in my favourite periods:

Imogen Robertson, Island of Bones, Headline Review (Cumbria 1783: one body too many found in a tomb leads to discovery of a past that won’t stay buried)

Justin Hill, Shield Wall, Little, Brown (tumultuous events from the death of Ethelred the Unready to the Battle of Hastings, first of a series)

M C Scott, Rome: The Coming of the King, Bantam (second in series takes spy to Judea in pursuit of man bent on destroying the Roman province, 1st-c AD)

Christopher Wakling, The Devil’s Mask, Faber (young Bristol lawyer uncovers deadly secrets in the aftermath of the abolition of the slave trade)

Elizabeth Chadwick, Lady of the English, Sphere (struggle for the English crown between Henry I’s daughter Matilda and his widow Adeliza who is Matilda’s stepmother)

Kate Quinn, Daughters of Rome, Headline (2 sisters in Rome in AD69, Year of the Four Emperors)

And not one, but two novels about Hereward the Wake:

Posted by Sarah Cuthbertson at 12:20 3 comments:

The mansion at Bletchley Park

Bletchley Park, near Milton Keynes in Buckinghamshire, was Station X, the home of the Government Code and Cipher School set up by Winston Churchill during World War II. It is now a museum and a tribute to the vital work that went on here which is reckoned to have shortened the war by two years and to have saved thousands of lives. Churchill quickly realised the importance to the war effort of code-and cipher-breaking, and his famous "Action This Day" order ensured that the operation was set up with all speed. Later, he paid tribute to the loyalty and integrity of the Bletchley workers by calling them "the geese that laid the golden egg but never cackled".


Top mathematicians such as Alan Turing and Gordon Welchman were recruited to find ways of breaking the complex and ever-changing ciphers generated by German Enigma and Lorenz machines which were used to transmit messages between German High Command and their armed forces. Turing and Welchman, building on work done prewar by Polish crypto-analysts, were instrumental in inventing the Bombe which decrypted Enigma messages thousands of times faster than the human brain, whilst Colossus, the world’s first practical electronic digital information processing machine - a forerunner of today’s computers, was developed to deal with messages from the more complex Lorenz machines. Station X: The Codebreakers of Bletchley Park by Michael Smith is a good overview of what happened here.

Today, thanks to the splendid efforts of enthusiasts and computer experts, there are at Bletchley Park functioning rebuilds of both the Bombe and Colossus. See here (for more on the Bombe rebuild) and here (for Colossus).

Whilst the top boffins at Bletchley Park were all men (this was the 1940s after all), the actual work with the machines was mainly done by women who were recruited for their intelligence and quickness of mind. Gordon Welchman paid tribute to two of his assistants, Miss Rock and Miss Lever, by paraphrasing Archimedes thusly: "Give me a Lever and a Rock and I will move the universe." 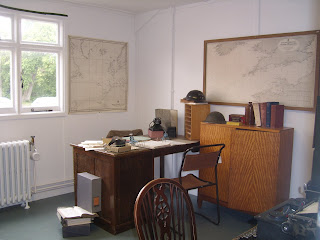 Block B contains the main exhibition including several Enigma machines and the Bombe rebuild, as well as a very striking statue of Alan Turing made of slivers of slate. 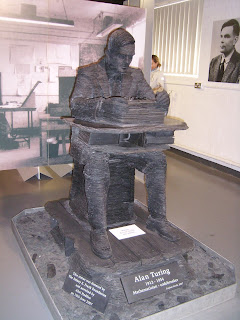 No photo can do justice to this magnificent tribute to Alan Turing by sculptor Stephen Kettle. Kettle has shown a seated Turing studying an Enigma machine. The detail is breathtaking - the shoelaces, for example, are composed of 200 individual pieces of slate! It's worth visiting Stephen Kettle's website where he shows close-up photos of the statue and writes about the thoughtfulness and detail that went into its making. 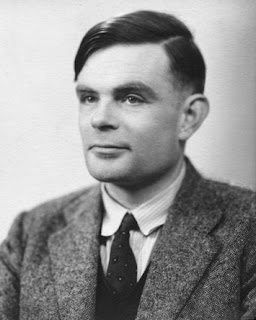 was perhaps the most interesting and the most tragic of the many geniuses who presided at Bletchley Park during World War II. The most brilliant mathematician of his generation, he should have been regarded as a war hero for his vital work at Bletchley but his life ended in undeserved disgrace and death in 1954 at the age of only 41. Whilst working on computers at Manchester University, he was convicted of a homosexual act (this being illegal at the time) and he chose chemical castration over a prison sentence. But the side effects of this and the concomitant destruction of his ongoing work for Bletchley Park's successor GCHQ, led him to take his own life by means of an apple laced with potassium cyanide. There's surely some symbolism here to do with knowledge and lost innocence, and I wonder if Turing chose an apple with any of this in mind.

Andrew Hodges' Alan Turing: The Enigma is probably the definitive biography and the author has generously supplemented it with a comprehensive website devoted to Alan Turing.

2012 sees the centenary of his birth and this website outlines a programme of commemorative events.

There's so much else to see and do at Bletchley Park (do see the website for details), you really can't do it all in a day, so tickets (valid for as many visits as you like in a year) are wonderful value.

Please support this stirring part of our heritage - visit soon and often! Bletchley Park receives no funds from government and relies on Heritage Lottery grants and the generosity of the general public to carry on its task of restoring and preserving the many historic buildings on the site (from wooden huts to a mansion). On our recent visit it was good to see the restoration of Hut 8 (where Alan Turing worked on Naval Enigma) with a reconstruction of Turing's office and other rooms dedicated to the sailors from HMS Petard who gave their lives retrieving vital Enigma code books from a sunken German U-Boat, and to the valuable war service of homing pigeons which is a lot more interesting than it sounds - there really were Hero Pigeons of World War II!

Posted by Sarah Cuthbertson at 13:23 3 comments:

As an addendum to the previous post and in the manner of An Awful Warning, here's a re-post of some rules which originally appeared in Solander, oh, a long time ago.

Rules for Writing Historical Fiction Set In Classical Times
Sarah Cuthbertson
I. Your Greek male characters must be philosophers, pederasts or homosexuals (but see Rule V). NB re Spartans: for 'philosophers' read 'stoics'. Your Greek females must be priestesses, nymph(omaniac)s or poets of the Sapphic persuasion. NB Spartan women should be wives/mothers/daughters who invariably instruct their menfolk to return home from war with their shields or on them.

II. Your Greek characters must always be witty, eloquent, learned and wise. (But see Rule X subsection v). Your Romans, though intellectual pygmies with no sense of humour or irony, can be relied upon to use the ablative absolute correctly when quoting Virgil or Cicero (which they must do at least once during any novel in which they appear).

III. Civilian Romans of either sex must (except for your Hero/Heroine) be any combination of decadent, fat, sleazy, grasping, politically corrupt or sexually depraved. They must be either bald (male) or afflicted with a high-rise hairdo (female). They must wear togas in all circumstances, however impractical (even the women). They must always consume (preferably to excess) stuffed dormice and braised lark’s tongues at least once during any novel in which they appear. 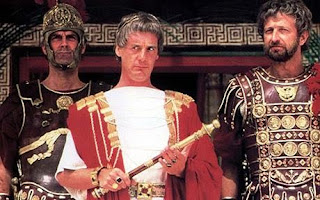 IV. Commissioned officers in the Roman Army must be anal-retentive control freaks with arrested libidos that can only be jump-started by comely Barbarian captive maidens. Such officers must always say, “The Roman Army is the greatest war machine the world has ever known” at least once during any novel in which they appear.

VI. Barbarians must always be portrayed as politically-correct Noble Savages, especially if Celtic. They must embrace sexual equality and be in total harmony with Nature and the Mystic Elements. They must always lose the battles but win the moral high ground (whatever that is), especially against The Greatest War Machine The World Has Ever Known. That’s probably the aforementioned lesson (see Rule V).

VII. In battle against Greeks and Romans, Barbarian chariots always have scythes on their wheels, never mind that blades would do more damage to themselves than to the enemy. Britons must paint themselves with designer woad before going into battle. This is not optional.

IX. Despite the evidence of Cicero, Pliny the Younger and various Roman tombstones, slaves are always ill-treated except of course by your Hero (see Rule VIII). Revolting slaves are invariably idealistic, selfless proto-Communists who want to change the world. They are never just people who want to go back where they came from.

i. Roman roads never have bends in them. Therefore they must always be described as “arrow-straight” (NB for the sake of variation, “spear-straight” is an acceptable alternative).
ii. Christians are always Persecuted, usually by lions.
iii. Jews are invariably Stiff-Necked. Sometimes they are also Biblical (or Apocryphal).
iv. Druids are usually to be found looming out of Celtic mists to incite rebellion. Some of them are women.
v. All doctors are both quacks and Greeks.
vi. All Roman emperors are devious psychopaths with speech impediments who marry their sisters, appoint their horses to the Senate, fiddle while Rome burns and die from eating poisoned mushrooms (or dormice or larks’ tongues - see Rule III).
Posted by Sarah Cuthbertson at 12:26 5 comments: