Book Review: The Redemption of Alexander Seaton by Shona MacLean

Given that my blog has the word book in its name, I really ought to talk about books now and again. I've been reading some rather good books lately and here's a review (slightly amended) of one of them, The Redemption of Alexander Seaton by Shona MacLean. It appeared in the August 2008 issue of The Historical Novels Review. 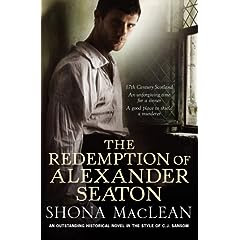 On a stormy night in 1626 in the Scottish town of Banff, the local apothecary's assistant collapses in the street. Next morning he's found dead in Alexander Seaton's house. Murder is suspected and when one of Alexander's few friends in the town is arrested, our hero sets out to clear him. But Alexander has a past. Having studied to be a minister of the Kirk, he had been denounced at his ordination for dishonouring the girl he would have married. The disgrace lost him not only his future wife, but also his vocation and his faith. Embittered and heartbroken, he took the only job open to him, that of a lowly schoolmaster.

Now, in the course of his investigations, Alexander must deal with his fellow-citizens, good and bad. Some reveal themselves to be selfless and wise, others devious, greedy or unscrupulous. He must contend with inflamed prejudices that erupt in a witch hunt and with accusations of treacherous Catholic plotting. But above all, he must confront his own personal demons.

This engrossing, atmospheric novel is a satisfying, skilfully constructed mystery with richly developed characters. But just as importantly, it's a vivid evocation of a particular time and place by an author whose uncle was the thriller writer Alistair MacLean and who is herself a historian specialising in 16th- and 17th-century Scotland. She has used her heritage and her skills to the full in creating this memorable and exciting read.

Here's an interview with Shona MacLean in The Scotsman.
Posted by Sarah Cuthbertson at 17:07 3 comments:

An Award and Some Nominations

Oh dear. I'm afraid I've become rather an unreliable blogger of late. Real life is so in the way in the blogosphere, as Mrs Gaskell might have said had she been living in the 21st century.

Sarah's Bookarama is, however, delighted to have been nominated for a blog award by Carla Nayland and Elizabeth Chadwick but, in view of its recent waywardness, it does feel rather a fraud. On the other hand, the undeserved accolade gives me a chance to nominate some of my favourite bloggers who are a good deal more dedicated than I am at the mo. I should like to single out Carla and Elizabeth of course, and others on my blogroll whom I nominated for a previous award.

But this time I thought I'd also mention a selection of excellent blogs I've discovered since then. So here, in no particular order, I present for your delectation:

George Orwell's Blog which was set up by The Orwell Prize to commemorate the 70th anniversary of the start of George Orwell's diary, much of which is published here for the first time. Each entry appears exactly seventy years after it was written. This from the introduction:

What impression of Orwell will emerge? From his domestic diaries (which start on 9th August), it may be a largely unknown Orwell, whose great curiosity is focused on plants, animals, woodwork, and – above all – how many eggs his chickens have laid. From his political diaries (from 7th September), it may be the Orwell whose political observations and critical thinking have enthralled and inspired generations since his death in 1950. Whether writing about the Spanish Civil War or sloe gin, geraniums or Germany, Orwell’s perceptive eye and rebellion against the ‘gramophone mind’ he so despised are obvious.

Cornflower. This is a beautiful blog, a source of daily aesthetic pleasure with its superb photographs, perceptive bookish thoughts and delicious recipes. To Cornflower I owe the delights of Sarah Raven's Garden Cookbook, from which I made 4 recipes in a week, which is a record for me from a single book. And every one was a winner. I'll probably be gushing some more about this book later.

Bad Science, the blog of Ben Goldacre, Guardian columnist, doctor and scourge of quackery, pseudoboffins and the misrepresentation of science in the media for the sake of an eye-catching headline. You know the sort of thing: tests on 5 blind mice show that red wine cures cancer/prevents strokes/lets you live to be 100. But what the hell: we're all going to disappear into a black hole next Wednesday - or are we? If not, there'll be time to read Ben Goldacre's book, just out in paperback.

Circle of the Year. This is a delightful blog that rejoices in the customs, traditions and natural rhythms of the English countryside, especially the Derbyshire Peak District. The photographs are superb.

NewsBiscuit, an up-to-the-minute satirical news blog to which anyone can submit material for consideration, a sort of www.notthetimesgrauniadindydailymailonline.co.uk with a special section on the Isle of Wight, for some reason.

Wife in the North, the tragicomic blog of a London journalist who, at her husband's behest, reluctantly moved with him, their two small children and another one on the way, to the wilds of Northumberland where the debatable joys of the weather, the natives and a major house renovation awaited her. The blog is certainly sad and funny - and wry and poignant and perceptive too, though the author got quite a tongue-lashing from some early commenters for her rude remarks about folk Oop North. Nonetheless she sold the idea to Penguin for a lot of money - yes, folks, it can be done - and the book of the blog came out recently.
Classical Bookworm Even if you're not interested in the Greek and Roman classics, there's plenty here for everyone who loves books and reading - from the serious to the quirky. The latest post is about how recent screen adaptations of Jane Austen misunderstand her values. Lots of fascinating sidebar links too.

Sceptical Cook. Nicholas Clee is a book journalist and food writer who uses this blog to experiment with recipes and ingredients. He's good on the how and why (and why not) of cooking and is usefully frank about his failures. The successes of course sound delicious. Lots for us foodies to learn and enjoy. He's also the author of that invaluable little tome Don't Sweat the Aubergine: What Works in the Kitchen and Why.
Posted by Sarah Cuthbertson at 15:38 3 comments: