Last September when we visited Portsmouth Historic Dockyard, we had an unexpected treat: the spectacle of HMS Victory firing a full 64-gun rolling broadside in honour of the new National Museum of the Royal Navy which incorporates all the naval museums under one umbrella. My photos (below) of the broadside don't do justice to the event but I found a You Tube video of it made by the companies who provided the pyrotechnics and set them off. Even with the sound on full blast, it doesn't do full justice to the real volume and depth of the noise. 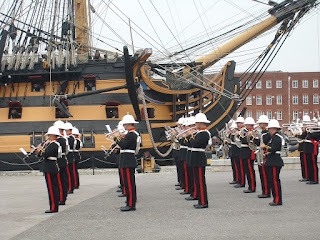 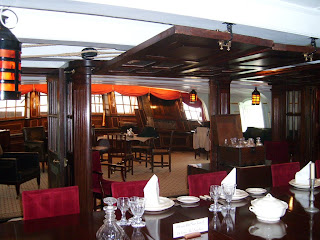 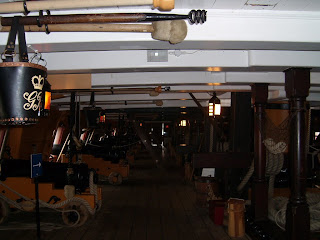 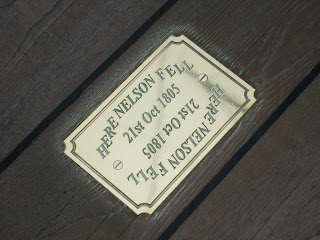 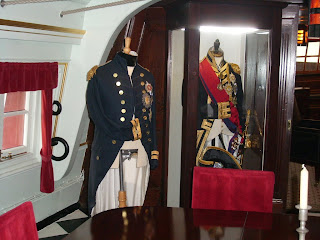 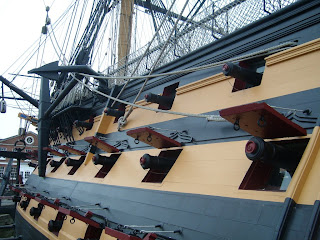 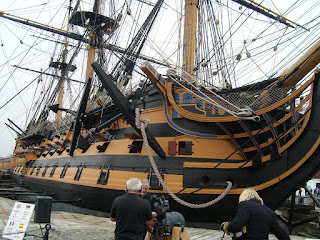 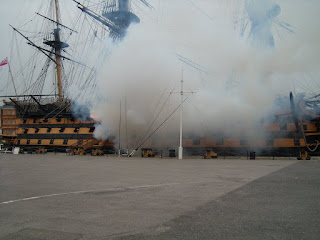 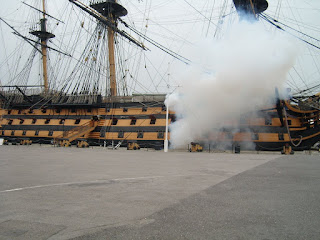 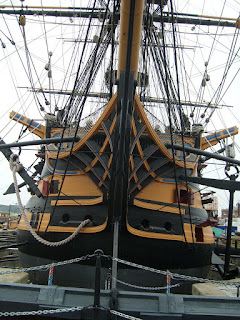 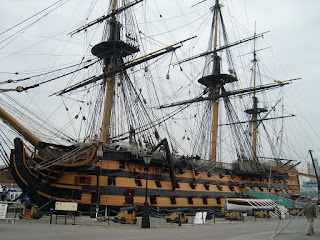 We were also lucky enough to be able to visit Henry VIII's warship Mary Rose (which sank in the Solent in 1545) just before the viewing gallery closed for the building of a new museum which will display the remains of the ship and a reconstruction of its missing side to full advantage, now that the lengthy preservation process of the surviving hull is complete.

Now that's what I call A Grand Day Out.
Posted by Sarah Cuthbertson at 10:35 No comments:

The Fighting Temeraire by Sam Willis

I'm a sucker for the majestic, elegant but deadly ships of the Great Age of Fighting Sail and HMS Temeraire, a British 98-gun ship of the line is, as author Sam Willis points out in this spendid new book, an iconic ship of the era. Unlike HMS Victory, alongside which she fought at the Battle of Trafalgar, Temeraire ended her life as a prison hulk and receiving ship and was eventually broken up in 1838 in the unsentimentally expedient way of the Royal Navy. But JMW Turner immortalised her in his famous painting, The Fighting Temeraire tugged to her last Berth to be broken up, reproduced on the cover of Sam Willis's book. The painting is not only Turner's best known, it was also voted the greatest painting in a British art gallery, having beaten Constable's Hay Wain and Jan Van Eyck's Arnolfini Wedding in a 2005 poll organised by the Today programme on BBC Radio 4.

The Fighting Temeraire, the first in a series published by Quercus called Hearts of Oak, is the story of not one ship but two. The earlier one of the name was a French 74-gun two-decker built in 1749 and captured in 1759 by HMS Warspite during the Seven Years' War. She was taken into the Royal Navy and sold in 1784. HMS Temeraire (without the accents) was built at Chatham and launched in 1798. At Trafalgar, under Captain Eliab Harvey, she fought astern of HMS Victory. Badly damaged relieving Nelson's flagship, she also captured the French ship Fougueux and helped force the surrender of the Redoutable, the ship from whose mizzen top a French sniper fired the shot that killed Admiral Nelson.

This book is driven by a fluid narrative, full of the authentic historical detail you'd expect from an Honorary Fellow in Maritime Historical Studies. And it's all informed by well-chosen illustrations and diagrams and the whole is made exceptionally vivid by the author's own experience: he spent 18 months as a Square-Rig Able Seaman, sailing the tall ships used in the Hornblower TV drama series and the TV film Shackleton.

The epilogue of The Fighting Temeraire is an essay on iconic warships and their continuing relevance down the ages. A sample:

...the biographies of warships are multi-layered and complex. Most obviously, the story of the Temeraire matters to our society because it was immortalized by one of the greatest artists ever to have lived, but Turner immortalized that story because it mattered to his society. In 1839 the Temeraire had already become icionic, and therein lies one of the peculiar values of iconic warships. They are potent historical objects because they transcend eras, and the ability to illuminate both our own times and those more distant offers an immediate and unmistakable example of the value of history. Moreover, the story of the Temeraire can be used to illuminate a whole range of historical topics, from the very broadest perspective of self-perception on an international stage - the question of how the navy serves to carry a nation's message around the world - to the tightest possible focus on day-to-day life in a warship.

Find out more on the author's website, including details of the forthcoming books in this Hearts of Oak series, Admiral Benbow and The Glorious First of June.

Another iconic ship of the era is HMS Bellerophon which also fought at Trafalgar (as well as the Glorious First of June and the Battle of the Nile) but which is perhaps best known as the ship that received Napoleon's surrender in 1815. She was affectionately known as Billy Ruff'n (Billy Ruffian) by her crew, hence the title of David Cordingly's fascinating biography of her.
Posted by Sarah Cuthbertson at 11:49 1 comment:

It’s National Novel Writing Month again, that madcap annual race to write a 50,000-word novel in the 30 otherwise dreich* days of November (at least it is, here in England).

In 2007 I did it for the first time, but had to abandon 2008 after 6 days because of a family emergency (see previous post). And so here I am again, just about keeping up the daily wordage and thoroughly enjoying it in a scary roller-coastery sort of way.

1. It’s fun, especially if you have the competitive urge.

3. For those of us who can procrastinate to Olympic standards it has a foolproof built-in secret weapon: a DEADLINE (not so secret, then, but it really does work).

4. To make the word count and deadline, you have to write with the brakes off, disabling your Inner Editor and your Inner Critic, that pair of dispiriting demons. No plot is too preposterous, no character too cringeworthy, no scene too silly. This your chance to try ’em all.

However, I’m sure most proper novelists will think NaNoWriMo an absurd and futile waste of time, perhaps even belittling to their careful craft. But I, and probably thousands of fellow NaNo nutcases, look upon it (and this is the 6th and most important reason for doing it) as a no-holds-barred, all brake-cables-cut, 30-day brainstorming session at the end of which we’ll be rewarded with our own tottering pile of literary poo - and a lot of it will certainly be umitigated poo, having been written at such an unfeasible pace. But from all that dross, a few rough-diamond-like characters and exciting plot-bunnies will be twinkling irresistibly out at us. These we can spend the coming months carefully extracting and polishing to shining perfection. In theory.

The NaNoWriMo website is full of encouragement and jokes, whilst the NaNoWriMo handbook, No Plot, No Problem! (UK, USA), written by that inestimable genius Chris Baty, founder of all this inspiring nonsense, is crammed with brilliant motivational tips which you don't have to be NaNo-ing to use.

Last year I put up a wordcount widget here – and look what happened. But as I don’t believe there’s a to be Tempted I’ll probably put one up again, if I can remember how to do it.

Right, so. I’m off on another trip to NaNoLand. I'm excited because I'm on the verge of inserting my first plot ninja (cunning devices to further the plot and up the wordcount): This one's called The Travelling Shovel of Death.

*dreich is Scottish for "dull, damp and miserable." I got the this expressive word from my mother-in-law.
Posted by Sarah Cuthbertson at 13:06 6 comments: